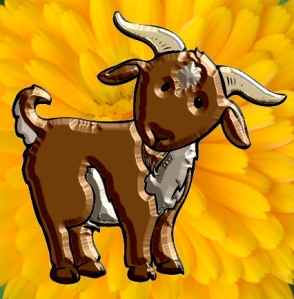 Old Granny Brown figured a way to make a little money. She had always loved her goats. She had three nanny goats. She used them for milk and would make cheese.

Now that her husband had passed away, she could ill-afford to keep them; until she came up with her wonderful idea: she would sell the milk! She placed a sign at her gate: FRESH GOAT’S MILK! The milk was very popular, so much so, that Granny Brown wondered if she shouldn’t get another goat. She decided against it. Selling goat’s milk at the gate was so she could keep the three goats she already had and loved. There was no need to be greedy.

In the meantime, the Right Honourable Mr Stanislaus McCready, Member of Parliament for West Shaffton, introduced a bill into Parliament. We really must stop this unhealthy sale of goat’s milk on the road side. The milk has not been treated. Goodness knows what diseases are been passed on to the general population. The selling of goat’s milk at gates became illegal.

Granny Brown had to stop her sales. She could no longer afford to keep her beloved goats. In the new year, the Right Honourable Mr Stanislaus McCready, Member of Parliament for West Shaffton, was given the country’s highest award. He was now a Member of the Imperial Empire’s Brigade (MIEB) for services to the health of the nation. He had served the nation with his altruistic actions.

Not long after, the Right Honourable Mr Stanislaus McCready, Member of Parliament for West Shaffton, announced his retirement from politics. He owned a large goat farm and cheese-making factory, he said, and wished to put all his energies into developing that.