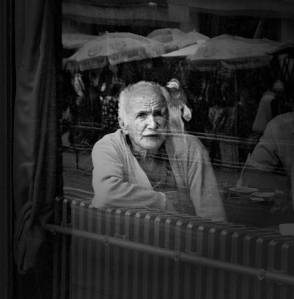 Mr Pawley was particular. He wasn’t a fusspot but he liked to do things in an orderly fashion. He was a widower and retired, and for his regular delight he would go to a different café each weekday, sit quietly at a table, and enjoy a latte. He would observe the world from such a perch.

On this day, however, it was perfect. The coffee was perfect. The table setting was perfect. The place was not too crowded and not too empty. The service was splendid. And the two old biddies within hearing distance were having an interesting discussion about… about this lady they once knew… what a ratbag she was! A lusty two-faced double-crosser!

The two old buddies certainly knew how to turn an ordinary instance of marital infidelity into a saga. But it wasn’t an “instance”, it was an habitual event. Mr Pawley had trouble controlling his laughter. They were that entertaining!

“And not only that,” said Old Biddy Number 2, “but Mr Pawley apparently still has no inkling about the libidinousness of his late wife.”