Certainly one couldn’t be too critical of the way the local Regional Council spent money to improve the lot of its residents. The neatness of back-country rural roads and facilities was indeed something to be proud of.

Julia’s little house in the hinterland was next to a road. It didn’t matter greatly because only half a dozen or so vehicles would pass by each day. On the opposite side of the road was a bank that had a few self-grown ferns and various weeds. Julia set out to make it a picture!

Her garden poppies had flowered profusely and there were literally hundreds of seed pods with thousands of tiny poppy seeds. She would collect them and scatter them onto the bank. When next spring came around there would be a feast of bright red poppies. One would hope that the sudden beauty of such a vision wouldn’t distract a vehicle driver and cause an accident!

Spring arrived! And indeed there were thousands of poppy plants all in bud. It was going to be a picture! A marvel! A wonder!

That was when the local Regional Council came along and sprayed the weeds.

It’s happened before and it’ll happen again, believe me, said the proud cauliflower to the surrounding weeds.

The little weed seeds had just begun to germinate in Farmer McGregor’s vegetable garden; right next to the proud cauliflower.

Last time, said the proud cauliflower, Farmer McGregor came along and pulled out all your weedy forebears and threw them over the fence. I alone was left to survey my lovely weedless kingdom. One prickly thistle, two deep-rooted docks, and a dandelion; to say nothing of all the other countless unnamed weeds that had become too familiar with me in my garden. As I say, it’s happened before and it’ll happen again, believe me.

Farmer McGregor is just waiting for you to grow a little bigger and then he will come along, yank you out, and toss you worthless lot over the fence. Unlike you, I’m permanent. It’s not half obvious that I’m the one in charge.

We call this plantain weed “soldiers”. It’s also known as rib grass, horse plantain, and lamb’s tongue. Anyone know any other names for this lawn pest – besides these and the official Plantago lanceolata? 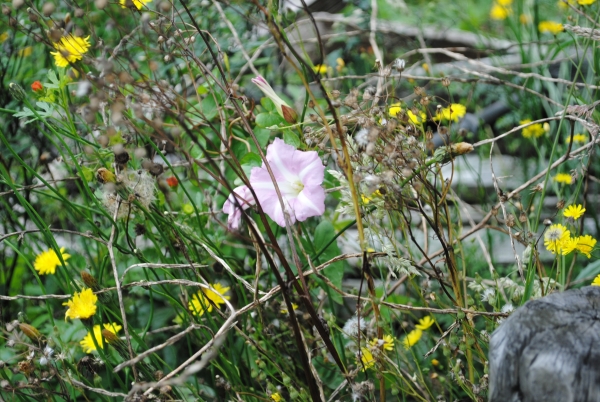 What would the world be, once bereft
Of wet and of wildness? Let them be left,
O let them be left, wildness and wet;
Long live the weeds and the wilderness yet.

Rhoda was an enthusiast. Sometimes she was accused of not being able to stick to something, but it was nothing like that at all. She would do something for a year, and then move on to another interest. All her interests had something to do with food. Two years ago she was into making pickles and chutneys. She had cupboards full of every combination; fig and leek chutney for example, and apple, rosemary and mango. Last year she was into breads; she made every type of bread under the sun. And this year (she had been given a book for Christmas) she was into edible weeds.

Until her Christmas gift – Edible Weeds of the World – Rhoda had no idea that so many of the plants growing wild were able to be eaten. First she tried wild onion. It grew everywhere. It seemed to be a cross between onion and garlic, and the leaves, flowers and bulbs could all be devoured. Why anyone would ever need to buy onions and garlic and chives after this discovery was anyone’s guess. Wild onions were as common as anything.

And then there were gorse flowers, and wild nasturtiums, and the roots and uncurled fronds of specific ferns, and fennel, and mint, and thistle heads, and… Quickly, Rhoda’s edible weed menu grew and developed into a huge and burgeoning thing of wonder. She foraged and found and used all sorts of weeds she hadn’t even known existed.

It was such a shame when she poisoned her whole family.

Weeds! The bane of a gardener’s life!

If you don’t watch it, weeds win in the end. They will take over the world.

Of course, they can be quite pretty! Here we have wild forget-me-nots, wild onions, and ivy.

Her parents had named her Fennel, which is a pretty name for the herbaceous, feathery plant that’s nice with cooked fish. Fennel, however, grows wild along the side of the road – which led Fennel’s younger brother to refer to his teenage sister as “a bit of a weed”.

Anyway – enough of this irrelevant introduction!

Fennel went to the doctor and was prescribed a bottle of medicine. It was a 300ml bottle, and the instructions said to take 20mls twice daily.

They couldn’t find their kitchen cup to measure out 20mls. Then Fennel’s younger brother found it in the garage. Thank goodness for that!

Fennel’s father was clearing the side of the road and had borrowed the cup to measure out weedkiller.