Good morning kiddies. Welcome to today’s long-distance learning lesson. We are going to learn how to help Mummy in the kitchen, so later when Mummy gets out of bed, she will get a big shock.

If you are too small to reach the kitchen sink then perhaps you could get a chair from the dining table and stand on it at the sink.

Fill the sink with water. I hope you know how to stop the water from running out of the sink. Excellent!

Now we are going to learn to wash the toaster. Toasters are full of crumbs and are yucky. Put the toaster in the water. Give it a good scrub with the brush. Don’t forget to put some detergent in the water. When it’s as clean as you can get it there will still be some dirty marks on the toaster but don’t worry about them.

Next children we must learn to dry the toaster. Find an electric outlet, it doesn’t have to be in the kitchen, and plug it in. Don’t forget to switch it on.

My name is Ruth, although everyone calls me Roly-Poly because I’m as wide as I am high. I’ve always been called that. I take it as a term of endearment; an affectional nomenclature. Even some of my teachers at school, years ago, called me Roly-Poly. I have a cheerful disposition, although I’m a little nervous about what I am going to tell you now. I tell you in the greatest confidence.

Yesterday my husband died. It was very sudden. One minute he was standing in front of the pop-up toaster at breakfast and the next minute he was as dead as a dodo. My first reaction was to break into laughter. I couldn’t believe it. I was shocked and I laughed hysterically. All the neighbours would have heard. If they were furtively watching the Who-ever-it-was take my husband’s corpse away they would have heard me shrieking with laughter.

I’ve been laughing all day. I can’t seem to stop, and I have to pretend it’s a nervous reaction brought about by grief or whatever. But that is not the case.

Only the day before he dropped dead he announced that he wanted a divorce. He was leaving me, and taking half of the stuff. The thing he wanted the most was the grandfather clock. That clock was my grandmother’s. It was really mine, not his. It is truly a magnificent and priceless heirloom. Only a week ago, when I came home from work, this stylish saleswoman was in the front room trying to sell my husband furniture polish. She thought the grandfather clock was an irreplaceable antique.

All in all, my husband’s demands were quite clueless; he wanted half the pots and pans, half the furniture, half of this and half of that. Why would he want half of my jewellery? He had it all worked out in his head.

And now he’s dead and it’s all mine! That’s why I’m laughing. I can’t help it. It is Fate; Fate with a little help from a loose wire in the pop-up toaster.

Arnold had no idea when he got out of bed that he’d be electrocuted by the toaster that very morning.

His early mornings always followed the same pattern: rise at twenty minutes passed six, fill the kettle with water and place it on an element on the stove top (it wasn’t one of those automatic turn-off kettles; it was an old-fashioned kettle that whistled when it was time to take it off the heat source), put four slices of bread in the toaster, and pour a little bit of milk into one of the two cups.

Arnold’s wife, Janet, always stayed in bed until a few minutes after the kettle whistled. She would leave just enough time for the tea to draw and the toast to toast. Arnold, for forty-eight years, had always called out the same questions from the kitchen to the bedroom:

“How many slices of toast do you want, dear?”

“Two as usual, thanks dear.”

“What do you want on the toast, dear?”

Janet snuggled up in the warm bed for the few remaining minutes. She would stay there for a little longer than usual. 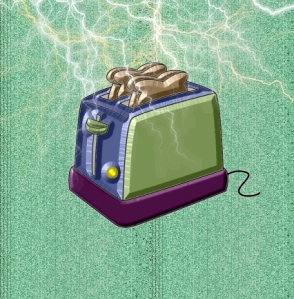 The thing was, Johnny had spent days, weeks even, adjusting his toaster settings to perfection so that his toaster would pop out the toast at the exact moment of impeccable toasting time and then Taylor moved in and she changed the knob setting on the toaster because she didn’t like her toast as brown as Johnny did and that was a mistake so he changed it back and Taylor changed it back again.

That was before the divorce. It’s hard enough being a film star without all this extra stress.

Listen to the story being read HERE!