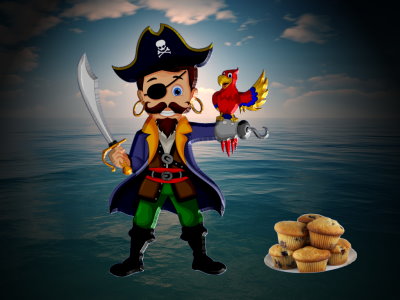 Ricky was in his last year before going to High School. And what a thrill it was when he was selected to play the lead in the school‘s annual stage production!

He was to play a pirate. Short Tom Paddy was the King of the Pirates. Ricky would have a patch over an eye and wear a head scarf and have a parrot on his shoulder. Not a real parrot of course, because who would want a real parrot to fly off into the audience during a performance? But a stuffed parrot; a fluffy toy parrot.

Mr. Adams the teacher said to Ricky, “Ask your mother to bake half a dozen muffins”. Parents were always keen to help out with props and the like. In fact, since it was a little country school the whole population attended such concerts and everyone got involved. It was a community exercise! And so Ricky’s mother gladly baked some muffins, and arranged them on a fancy plate.

The performance began. Everyone was there – except for old Mrs. Leach who had a patch of the gout and couldn’t attend. There, sitting on a table in the middle of the stage, were Ricky’s mother’s muffins. The girl playing the part of the Captured Princess said, “Help yourself to a muffin, Pirate Short Tom Paddy”, and so Ricky grabbed a muffin and began to eat. It was dry and solid. After all, the muffins were over a week old. It took a good four minutes to finish the muffin, and the Princess said her line: “I see you have eaten all six muffins.”

It must have taken twenty minutes for Ricky to finish all six muffins. With every bite, with every chew, the audience became more and more helpless with laughter.

“I see you have eaten all six muffins,” repeated the Princess.

Ricky’s efforts got a standing ovation. It was the most enjoyable production in years!