Before she got married, Tracey would occasionally buy and eat sauerkraut. It would come in a jar at the supermarket. All she need do was throw a few peppercorns into a pot, empty the jar into the pot, perhaps add a bit of water, and heat it up.  It was a delicious accompaniment to sausage or corned beef or something like that.

When she got married she never used it again. Tommy described sauerkraut as smelly, rotten, German cabbage. Over the forty-two years of marriage, Tracey sometimes thought of sauerkraut, usually when she passed the sauerkraut in the supermarket aisle. But no! Not a single shred of putrid brassica passed her lips during all those years.

It was sad when Tommy died, but Tracey knew that she would eventually have to get on with life. She had to remind herself that it was her life alone now; she didn’t have to compromise. She went to the supermarket and bought a jar of sauerkraut and some sausage; to consolidate her conviction of independence. She would have it for dinner.

Were the Fates laughing? Was it one of those ironies that rear its ugly head when one least expects? On the first bite of sauerkraut it went down the wrong way, and Tracey choked to death.

As the coroner joked to his colleagues, “It was a waste of a jolly good sausage”.

Vicky decided to walk to the shops because all she needed was some tomato sauce and a potato. If she wasn’t walking she would buy a bag of potatoes, but it was such a lovely day that she decided to walk and not have to carry home a heavy bag of potatoes. She would simply get the one potato for her dinner and then tomorrow she could take the car and then she would get a whole bag of potatoes. Not too big a bag of potatoes of course because it doesn’t take that long before they start sprouting, and since she lived alone she didn’t actually needed a very big bag. Of course, she also varied her diet with pasta and rice and couscous and various noodles. It’s not as if she had a potato every day, but on this particular day she was peeling and boiling a potato to go with coleslaw and a sausage (which is why she needed to get some tomato sauce).

When she returned from the shop she started preparing dinner right away. After all, it was time for the daily news on television, and she could see the television screen from the kitchen bench. Dear me, there is such tragedy in the world these days, and the poor people on the street were almost enough to make one feel guilty about having a sausage.

Since it was Wednesday, after the television news came a program on Nature. Vicky loved to watch it. It was always most interesting and she would (only once a week mind you, usually she would sit at the dining table) eat her evening meal in the armchair in front of the television.

The next day Vicky got a phone call from her sister saying that she (Victoria) should find a few interests and not mope around doing hardly anything. Vicky said that her sister was probably right. She would do something about it. But first, since the day was so sunny and lovely, she would walk to the shops and get a potato to go with her sausage for dinner. (Sausages come in packets of six and she didn’t want to waste them). This time she would have a bit of variety by mashing the potato. 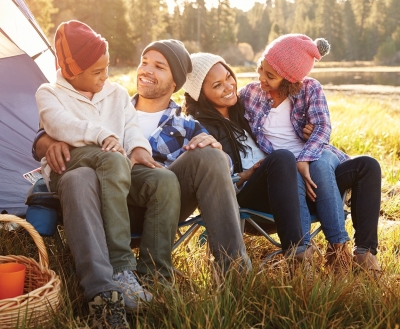 There’s surely little more scrumptious than a sausage cooked on a camp fire, then wrapped in a buttered slice of bread with some chopped fried onion and tomato sauce. Follow this with a hot cup of tea or coffee made with water boiled in a tin hung over the hot embers. It’s summer! It’s evening! There are a few mosquitoes but the insect repellent keeps most at bay. All that’s needed now is a competent guitarist to complete the spell. A little sing-along and a bit of yarn telling and all is perfect.

Rufus and Trina with their two children had been camping for a week. Twice a man had come along and told them to move, but they hadn’t budged. Apparently they were not permitted to have a camp fire where they were, or to erect a tent. Rufus had used some choice words at the man, which had prompted Trina both times to say, “For goodness sake, Rufus, not in front of the children.” It made little difference; Rufus gave the man a piece of his mind in a way that only Rufus could.

It was nearing the time they would have to move. The camping food supply was getting low, as was wood for the fire. Camping on their driveway after the catastrophic earthquake was only a temporary measure. But where to go?