Karl lost his mother when he was three years old. Now he was seven. His father had married again a year after Karl’s mother died. The step-mother was not very nice, and had three children of her own who were a little bit older than Karl. There was Margarette, Suzette and Angelo. Karl didn’t have any brothers or sisters of his own.

One day at school, Karl’s teacher dropped dead in the classroom. Just like that. It was very traumatic. The whole class got free counselling. Then Karl got his foot jammed while playing outside and he had to have his leg in plaster for six weeks.

When his father suffered severe injuries in a car accident, Karl was looked after by his step-mother. That was when the most horrible thing in his life happened. It made all other tragedies look like nothing.

His step-sister, Suzette, told him that Santa Claus was not true. 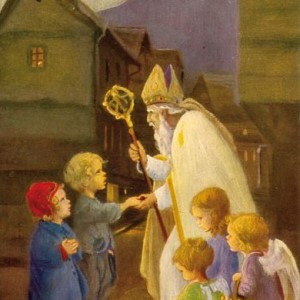 Ms Peaburger set her class an assignment; all were to write and present a speech on a given topic. Modesta had to prepare her speech on “The Origins of Saint Nicholas”.

“Saint Nicholas was the Bishop of Myra, in Turkey, in the fourth century. He would celebrate Mass daily for the people of his Diocese, and he would hear Confessions, as well as Baptize and Confirm young members of his flock. He would celebrate Weddings for happy couples. And he visited the sick and Annointed them with the Sacrament of Extreme Unction as it was then called.

He spent many hours in prayer every week, and practised much penance and fasting. Apparently he even wore a hair shirt to…”

“Excuse me,” butted in Ms. Peaburger. “You have clearly got the wrong Saint Nicholas. What you’re talking about has nothing to do with Christmas. Next time you’re given an assignment I suggest you research it thoroughly. Sit down!”