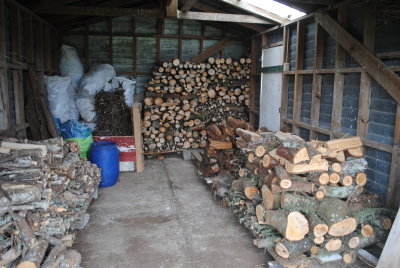 When Dawn saw the dead body in her woodshed she didn’t know what to do next. Clearly the body had died several hours earlier. Rigor mortis had already begun to set in. Dawn had once worked as a nurse so she knew these things. Trying to revive the body was a waste of time. It was as dead as the wood in her woodshed.

Dawn was a practical woman to the hilt. She remained absolutely calm. She surveyed the situation as if she was in a fabric shop selecting a pattern for a proposed table runner. What to do with the body? She shut the woodshed door and went back into the house.

It wasn’t winter. It wasn’t cold. There would be no need for her to get firewood for a couple of months. She had bought an air ticket for her husband to go to Hawaii on a vacation for several months. They did that in their marriage once every decade or so. It cleared the air and they could start afresh. He had left yesterday, so the story would go. Dawn would simply leave the body in the woodshed until winter.

That way the coroner would have difficulty determining the cause of death of her husband. “But I thought he was having a great time in Hawaii.”