You’ve no idea the trouble Noeline Hartstonge and husband Quentin had in procuring ethically sourced cocoa beans. They were to be used as a conclusion to an ordinary dinner with several other couples they had met through the local Croquet Club. Ethically sourced cocoa beans and organically grown bananas. These days it was fast becoming almost impossible to entertain.

Clyde Currie was the only invited guest to eat meat. Was he going to feel hard done by when served only vegetables? Three of the guests (I shall not name them because things could become tedious) were vegan. Does one make the whole meal vegan, or are the vegans happy to sit at a table while Clyde sucks on a lamb chop and the other guests quaff egg-based quiche?

Noeline settled for a completely vegan option. It was a lot more straightforward than trying to cater for all sorts of needs. She had to make the cucumber soup twice, because the first time she accidentally used (out of sheer habit one suspects) chicken bouillon. The first main course, made mainly with kidney beans, once prepared looked a little too much like ground meat, but Noeline managed to disguise the meat-look by decorating it with button mushrooms.

The little dinner party began. The pre-dinner aqua with ice cubes and a smidgen of organic lemon juice was delightful. When it came to the mains, Audrey enquired that although it looked like ground meat with mushrooms on it, she hoped it wasn’t cooked in an oven that previously had meat cooked in it. The flavour comes through, and Audrey said she wasn’t a raging carnivore. She would pass on the kidney beans. Ronald and Emile concurred. They didn’t want to make themselves ill.

Francine said she would pass on the main because of the mushrooms. Although she wasn’t impartial to them, she had read somewhere that sometimes people can develop allergies later in life. She had no intention of tempting fate. Also, there was no guarantee that the mushroom farmer had standards of hygiene approved by the government. What did it say on the packet?

I do hope, Noeline, that you didn’t use salt; or if you did that it’s kosher. And I heard that pepper is actually fattening.

In the end, all settled for an organic banana, although Myrtle gratefully declined because of unjust wages paid to workers in Ecuador. It’s because people unlike her are not taking a stand that everyone in these third world countries have to do without. It’s bananas!

But what a delightful evening! Quite, quite delightful!

Noeline Hartstonge and husband Quentin are thinking of taking up lawn bowls. 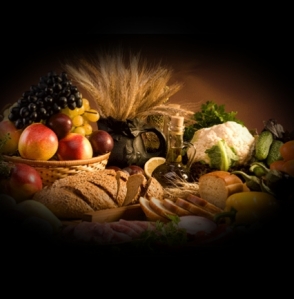 I don’t want to bore you, but I do want to tell you a little about what I’ve been eating. At least, it’s what I’ve been having for the main evening meal. It doesn’t include what I might eat at other times during the day.

On Monday it was ground shoulder of farm raised beef served over pearl barley and oven-roasted red potatoes. Served with a sauté of fresh pan-wilted spinach, fresh kidney beans, zucchini, green beans, roasted corn mash and a touch of garlic.

It sucks being a Cavalier King Charles Spaniel in this household. 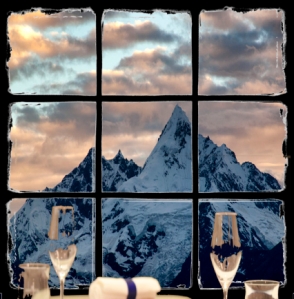 Alfie, professional bachelor, decided he would spend his forty-fifth birthday at a ski resort with some of his friends. There were five of them altogether. On the evening of his birthday, even though his friends said the Birthday Boy shouldn’t have to pay for dinner, Alfie insisted that it was his birthday and he wanted his friends to have a good time.

“Order what you want, and as much as you want,” said Alfie.

The meal was delightful. The food was glorious, and sitting there next to the huge window overlooking the ski field on the snow-covered mountains was unbelievably wondrous in evening light.

Delightful! Alfie was the only one in the group that still smoked, so he went outside onto the veranda for some fresh air and a quick puff or two. That was when the avalanche struck.

Seven thousand years later, a mountaineer discovered Alfie’s body buried in the ice. Scientists were thrilled with the quality of preservation. The body told them so much about the habits of people seven thousand years ago. The victim, of a possible avalanche, had just eaten: