Alyah Smithson had fourteen library cards. It all began when the town library’s head librarian would not let Alyah take out more than five books at any one time. Alyah waited until another librarian was at the desk and requested to become a new library user under the name of Delia. Mercy of mercies! Oh the relief! She wasn’t asked for any ID. This was an invitation over time to get another dozen library card under false names and addresses.

It meant she could have seventy books out all at once. The library had several outlets in the town and spilled over into the neighbouring towns in a “library affiliation”. Alyah didn’t have to use the same library and librarians all the time. The scheme was greatly helped once self-issuing machines became common.

A funny little incident happened when Alyah requested “A Snippet of a Snapshot”, a new best-selling novel by Evelyn Snodgrass.  She was told that it was currently out on loan and she would be informed when the book was returned. Imagine Alyah’s surprise when she realized that Samantha Winkworthy who had the book out was in fact herself!

The time came, after about a year, when Alyah decided to move to Thrushton-on-Waverly, a distant town. She went to the libraries in her old town and borrowed five of the most glorious books with each of the fourteen library cards. There were seventy books in all. She packed them in a box for removal. This was the ninth time Alyah had moved house in recent years.

Even though Cecilia Coddington of Thrushton-on-Waverly had an extensive home library, she had managed to acquire fourteen library cards. 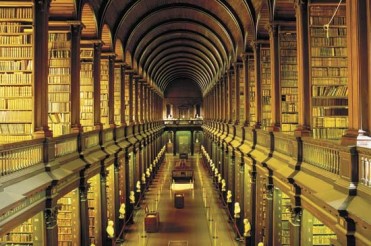 It is possibly my greatest achievement; certainly the thing I have done in life that makes me most proud. And yet, it was such a simple thing; a nothing really. It does one good to do something decent once in a while.

It was just a holiday job, working in the library at a university in Dublin where I was studying for a degree in mechanical engineering. My main task was to shelve the returned books. I suspect they hired me because I’d be more than useful fixing the squeaky wheels on the book trolleys! I was desperate to get the job because of this good catholic girl who worked in the library part-time.

Anyway, we were a bit behind in the re-shelving so we stayed longer after closing time, and me and Cassandra were just having our third coffee when this thief appeared. Students steal books like they’re going out of fashion. He had a stolen book under his arm, and I was lucky enough to be able to wrench the book from him and smash him over the head with it. The book was wrecked (it fell into a hundred pieces) but I stopped the thief and saved the day. Anyway, what’s one book in a library of tens of thousands? I was amazed how the book fell apart; disintegrated. Publishing standards these days have certainly slipped. The Book of Kells or something.

Apart from getting some groceries, Enid had two things to do in town that day: she had to return a book to the library, and she had to pick up a medical prescription at the pharmacy. Probably the best thing was to do these two errands first, before getting the groceries, and then she could whip off straight back home in her little blue car and not let the frozen ice cream melt.

And then there were the groceries. She had the list somewhere in her purse. At least she hope she’d put the grocery list in her purse. Once or twice over the years she’d left it at home!

“Oh! Blow!” thought Enid. With her musings she’d inadvertently passed the turn off to Hector Avenue, and now she had to rearrange the order of getting things. She would turn down Styx Street.

She turned down Styx Street. That was a pity, because she was hit by a truck and spent the rest of her days in a wheelchair.

The old school librarian was a charmer. Overdue books didn’t greatly matter. There was never a fine. “Just try and get it back tomorrow if you can.”

All students issued and returned their own books on the computers. There were no beeps at the doors that went ding-dong if someone tried to walk out with an unissued book. On rainy days, the library was packed with students reading, playing chess and cards, and studying. The annual library fair made thousands of dollars; organized by the librarian, but run by the students of course. At the fair, new books were bought and donated like they were going out of fashion.

One year the library lost thirteen books. The library ran on old-fashioned trust. It’s not good enough, said the school principal, and he sacked the irresponsible librarian.

A new librarian was appointed. She was outraged, horrified, disgusted. Of the thousand or so books out, eighty-seven were overdue. Hefty fines were imposed.

On rainy days, no one with wet shoes could enter the library. The book fair was a flop. Appointed and trained librarians alone were able to issue and return books. The librarians wore special badges. Book thief detector ding-dong things were installed at the door. The kids called the librarian “Hitler’s Nanny”.

A mere one hundred and forty-five books went missing in the first year. The principal was delighted. It was good to get some discipline back into the library. It didn’t matter that most kids had given up recreational reading. Who cares? Discipline. It looks good from outside. That’s what parents want.