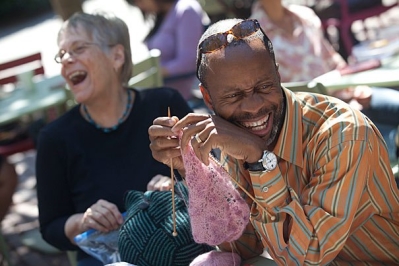 Meredith Scantlebury wasn’t simply horribly nasty; she was horrible AND nasty. Whenever there was a Pot Luck luncheon for those in the Stitch and Bitch Knitters’ Guild for example, Meredith would furtively go from dish to dish and drop in something yucky. That way she ensured that everyone else had a horrible-tasting dish, and her contributing dish was simply terrific.

Once she tipped half a bottle of Tabasco Sauce into Angelica Merklebach’s sliced almond fruit cake. Another time she stirred half a cup of kitchen detergent into Frederica Swingenhammer’s creamed corn. The deviancy went on and on.

After several pot luck dinners had come and gone people began to realize that Meredith’s dishes were the only dishes that were edible. Perhaps she had something to do with the inedibility of everyone else’s contributions?

Angelica and Frederica took things into their own hands. When Meredith loudly, ostentatiously, and triumphantly removed the lid from the silver platter holding her delectable sweetbreads, they were crawling with maggots. Maggots!

All of the knitters of the Stitch and Bitch Knitters’ Guild gathered around and roared with laughter. Meredith stormed out and was never heard of again. Her left-behind silver platter was donated to the local theatre. It was filled with kitty litter and the theatre cat used it as the need arose.