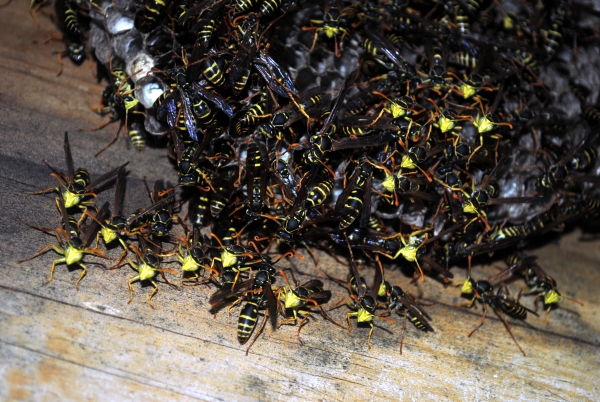 (The photograph is of Paper Wasps at my front door! No, I didn’t leave them there! But look how organized they are – soldiers, guards, collectors, builders… !)

Garrett was eleven years old. He liked spiders and bugs and stuff. Goodness knows how many insects had perished as he kept them as pets trying to work out the parameters. What do they eat? Where do they live? Under what conditions do they thrive? So far, he had had little luck in keeping insects as pets; except for tarantulas, and with eight legs and not six they were better off being called spiders. Besides, how to keep a pet tarantula was well documented. Also ants. He had an ants’ nest behind glass and he fed them bread soaked in sugared water. They seemed to thrive.

Of course, he also cared for monarch butterfly caterpillars. He knew what they fed on, but for the last couple of years he’d grown a little tired of them. They were so commonplace. No! What he wanted was to keep scorpions, and bumblebees, and grasshoppers, and wasps, and… different things.

As luck would have it, once he visited the insect department of the local museum at the same time as a visiting entomologist. Professor Marinko Magyar was one of the country’s leading experts. He specialized in native species of bees, but he knew an awful lot about other sorts of insects. Garrett told him of the difficulty he had in keeping insects as pets.

The professor could not have been more helpful. In fact, he was so delighted that a young person was enraptured by insects that he offered to help Garrett set up a bumblebee’s nest. It was wonderful! Under a removable wooden lid, the bees were behind glass so everything could be observed. A polythene pipe opened to the outside world where the bumble bees could freely come and go to collect pollen and whatever it was they collected. It was a lot of work setting it up, but the professor enjoyed helping the young lad who had shown such interest.

Next, the professor showed Garrett how to successfully keep crickets. The particular species they cared for required rain before they would lay eggs, so a water spray bottle was kept handy. Fortunately, Garrett’s wonderful and expanding “insect zoo” was in a large spare building apart from the house, so there was plenty of room to expand; and far enough away for Garrett’s mother to avoid having to come near “the horrible things”.