Westby was named after his grandfather, and because he was embarrassed about his name as a kid he withdrew into himself and became a bit of a loner. He had one quality however that was admired far and wide: he could draw the most fabulously realistic pictures. It was better than a camera; you would swear his pictures had come alive.

Westby painted lions and tigers and elephants and giraffes and warthogs and hyenas and vultures and everything else African, including the shrubbery. In fact the animal paintings were so realistic that people began suggesting it would be a waste of time seeing the rest of the animals in the zoo. A quick visit to the Zanzibar Red Colobus and you’d seen the lot.

At first they were a little stunned, and then they saw the painted pair of Zanzibar Red Colobus. They raced to them. They kissed them! They licked them! They tried to hug them! You could tell they recognized their own kind.

The next day they died of lead poisoning.

It sure wasn’t everyday that you see one, that’s for sure. Nick had returned daily for several hours to the swamp in the hope of catching sight of the critically endangered Zapata Rail (Cyanolimnas cerverai), one of the world’s most threatened waterbirds. The sighting had been by two staff members of the Natural History Museum of which Nick was in charge. He had sent them out one afternoon on a mission to “sight the Zapata Rail” as one had not been seen in over four decades.

His staff’s sighting had been reported in newspapers up and down the country. It was brilliant publicity for the museum. In fact, the two staff members were almost overnight sensations themselves. Wonderful!

Nick now knew then that there was definitely at least one of these birds in this swamp. That is why he had returned for five days in a row on his annual vacation. His vacation ended tomorrow. Today was his last chance.

Suddenly a Zapata Rail’s head protruded from the sawgrass at the side of the bank. After a few seconds the bird emerged slowly into the open and stopped.

The stuffed Cyanolimnas cerverai  is proving to be a popular addition to the museum’s collection. 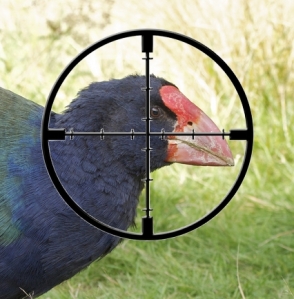 (This is based on a true incident)

There was no other thing for it. The isolated island was home to four of the few remaining takahe birds in the world. But the island population of pukeko had exploded. Both species of bird shared the same environmental conditions. Both were swamp dwellers. Pukeko were common. They had to be killed to give the takahe a chance. Besides, pukeko were everywhere on the mainland. There was no need to protect them. Only about 300 takahe remained in the world.

The Deerstalkers Association volunteered to cull the pukeko. A day was arranged. Seven hunters took to the island.

They returned to the mainland in the evening.

“We got them!” they said. They were pleased with themselves. For a while…

Can you tell the difference? Which is which?