Giselle’s husband, Jeffrey, had said quite clearly thirty years ago that the Convolvulus (Morning Glory, Bindweed) growing wild in their garden should be exterminated. “It’s poisonous,” he said. “If you made a brew with it, it could kill you.”

“Who’s going to make a brew out of convolvulus?” asked Giselle. Still, she pulled out most of it from the garden and destroyed it; if only to keep her husband from going on about it.

Over the thirty years the convolvulus kept reappearing. It was impossible to eradicate every root and it sprouted up will-nilly. These days Jeffrey’s dislike of convolvulus grew into an eternal diatribe. Goodness knows why he didn’t go into the garden and pull the weeds himself. Quite frankly, Giselle had had enough. “It’s a dangerous plant. It’ll kill you.” On and on Jeffrey went. On and on. Giselle did all the work around the house.

That was when Giselle discovered that a brew made with convolvulus didn’t work. 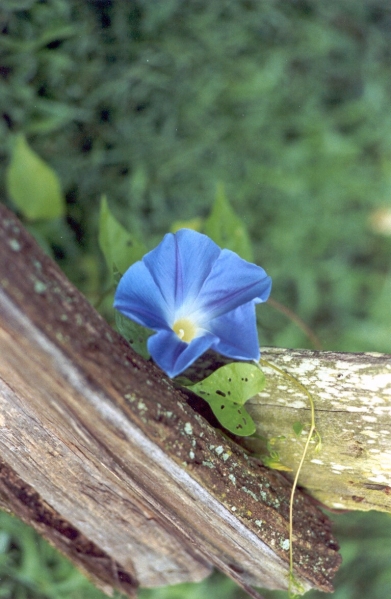 When I lived in North Carolina, I planted this in the garden. It is called Morning Glory or Bindweed. It is my favourite flower, especially the blue!

In New Zealand it is called Convolvulus. It is classified as a noxious weed. It can strangle gigantic trees. It is a horrible pest. The music tries to capture its sinister creep of destruction.

I still think I like it! Especially the blue!