(WARNING! The characterisation in this story calls for the occasional swear word…)

Poodle Jerkin was a clown of questionable talent. He snorted cocaine. Who wouldn’t if you worked day in and day out for a circus that hardly paid for nothing? And his wife had left him and taken the kids. There was no hope, so he snorted cocaine and got the sack. Yeah, he wasn’t good enough even for a fuckin’ circus.

He got a job as a clown at a transgender nightclub, where he gyrated up and down on the bar top, dressed as a clown and wanking while patron stuffed dollar bills down the front of his jock strap. The smile was painted on his face, but underneath the makeup he was crying. Then at the end of each night, Jolie the manager or owner – he didn’t know which but who gives a shit? – would take all the bills out of his jock strap and finish off what he’d started on the bar top. He’d leave each night with a couple of bucks and somehow he was meant to have a life.

One night, on the way back to where he slept, he walked past an appliance store. On a big television screen a politician was spouting:

We’ve got to get rid of all these no hopers sleeping on the street. There are needles everywhere. There’s human excrement. We should round them up and do something about it.

Poodle Jerkin picked up a nearby laptop and threw it at the television screen. He’s in prison now. What the fuck? It’s survival. 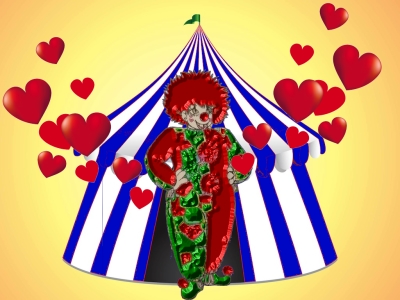 When he looked at the clown in his greens and reds, his raging coulrophilia kicked in. Lancelot Grope couldn’t help it. He was only too pleased that he himself was wearing baggy clown’s trousers.

Lancelot’s coulrophilia had made his teenage years almost unbearable. The trouble had been that his mother had been obsessed with a relatively muscular trapeze artist named Standish Nikolayevich, and Lancelot was dragged from one circus performance to another. It was okay for his sister to admit that she was obsessed with circus horses (and for his mother to be obsessed with Standish Nikolayevich) but to admit to coulrophilia was another thing altogether. Things came to a head when Cocoa Craven Hook, one of Lancelot’s favourite clowns, took Lancelot out the back.

Cocoa Craven Hook was wearing his greens and reds and looked amazing.

“Judging from looking at your trousers,” said Cocoa, “you seem to be pretty enthusiastic about clowning. Can I show you a thing or two? Let me pull a surprise out of my pocket.”

Suddenly a bunch of flowers appeared from nowhere. One of the flowers squirted water in Lancelot’s face. Lancelot laughed.

“I’ll show you how it’s done,” said Cocoa kindly. “First let me put these flowers in your pocket.”

Lancelot was hooked. He’d never experienced anything quite so exciting. There was no going back. He would be a coulrophiliac for life. Coulrophilia would be his life’s calling. He would use it to cure those who suffered from coulrophobia. And indeed he did.

Today, especially in Hollywood, there’s many a former coulrophobiac who is now a practising coulrophiliac. They’re in the News, and some of them even made it to the circus.

(The poetic form selected for this month is the English or Shakespearean Sonnet).

I wish I were a clown and worked with youngsters.
I’d wear a funny hat and great big shoes.
I’d wield a water-pistol like those gangsters
In the movies, and play at peek-a-boo.

Instead, I am a joke, they laugh at me
And shout offensive names that get me down.
Hey Scrooge McDuck! Hey Greedy-Guts! You see
They think I am the fool who’s not a clown.

It’s true I’ve lots of money that I’ve saved.
I live alone. My wife died years ago.
The kids around here aren’t that well behaved,
But then again, there’s no space here to grow.

I guess I’ll bite the dust one day, but hey!
This clown shall leave a park where kids can play.