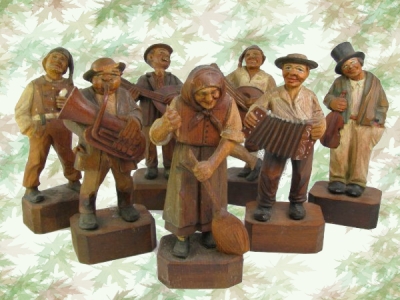 (Grateful thanks to Lisa of arlingwords for giving the opening sentence.)

Trees are really amazing things, but most people don’t even notice them.

Lawrence and Keith’s properties shared a common boundary, and there slap-bang on the boundary was an apple tree as old as the hills. Keith thought the apple tree an eyesore. “It doesn’t produce much fruit anyway, and they’re sour.” But Lawrence had grown up with that tree. He thought although it was old, and in places a little spindly, that it had character.

“We should chop it down,” said Keith.

“Over my dead body,” said Lawrence.

Keith took things into his own hands one Saturday afternoon and chopped it down. “There!” he said. “It’s just a pile of useless twigs and firewood. Lawrence might as well take the lot.”

Lawrence did take the lot, and over time he carved the wood into seventy-four miniature figurines. There was a farmer going to market, for example, with a piglet under his arm. There was a haggard old lady selling pears. Each figurine sold for around ninety dollars. And the chess set reach fifteen hundred.

“We’ve got to put up a proper boundary fence,” said Keith, “and you’re paying half.”

Lawrence did pay half. And what a magnificent boundary fence it was! He planted a row of fruit trees on his side. And not a penny of the cost came from anywhere except from the good old faithful apple tree.