(This is the seventh story in a week or so of repeats. “Pigs” first appeared on this blog on 15 November 2015.)

It constantly amazes me how wrongful misinformation has been perpetuated down the centuries. The Three Little Pigs’ names were Marjorie, Eleanor and Constantia. Clearly, because they were builders by profession, the sexist yesteryears couldn’t bear to think of the pigs as females. Book illustrators portrayed them in men’s clothing for eons.

There they are now, all crowded into Constantia’s brick house.

“Go away, you dirty Big Bad Wolf,” bellowed Marjorie from the upstairs window.

But who is this appearing? Why! It’s Little Red Riding Hood on a horse!

“Yeah,” said Little Riding Hood, “my real name is Jason. I have no idea why they paint me as a girl.”

“Save us!’” cried the Three Little Pigs. “Shoot the Big Bad Wolf!”

Little Red Riding Hood was skipping her way merrily through the forest, holding a basket of food that she was taking to her grandmother.

Suddenly a wolf appeared from nowhere.

“What big teeth you have,” said the wolf.

“What big feet you have,” said the wolf.

“Let me look in the basket to see what you are taking to your grandmother,” said the wolf.

“Go away,” said Little Red Riding Hood. “I hate it when little boys dress up and follow me around like a bad smell.”

So the Big Bad Wolf scampered off. He would try to find Anita Alder. She was a scaredy-pants. She always screamed when he gave her a fright. 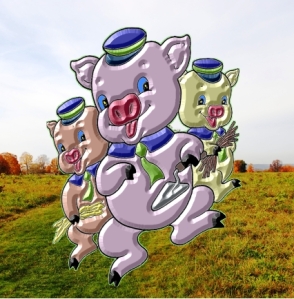 There surely is no better way to confound an enemy than to be kind. And that’s what the Three Little Pigs did; they invited the Big Bad Wolf to supper.

“Maybe,” said one Little Pig to the other two, “if we all give a hand and invite the Big Bad Wolf for supper then things won’t be too bad.”

So they all gave a hand and invited the Big Bad Wolf for supper. He came, but said he didn’t eat pork. So the Three Little Pigs had all given a hand for nothing.