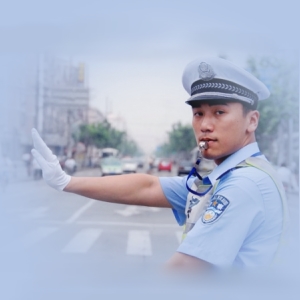 It wasn’t just depressing; it was downright infuriating. Nick had been stopped for speeding, and THE COP WAS YOUNGER THAN HE WAS.

You know you’re getting old when the cop who stops you for speeding is younger than you are. There was a time when Nick was always younger than the cop. He would always say, sorry officer, it must be youthful enthusiasm; I won’t do it again. The old cop would let him off with a warning. But now THE COP WAS YOUNGER THAN HE WAS. These days he was never let off with a warning.

Nick took the cop to court. Nick was a top class lawyer. He knew the law and how to manipulate it. He made sure that the upstart wasn’t going to be stopping him again. The cop’s looking for another job if you’ve got a vacancy.

When Hilda Woolley turned 106 what a fuss was made. She donned a brand new pink frock with a blue jacket. She looked a picture!

She was the only person in town ever to have reached 106. What a record! What an achievement! Of course, the local paper had to get in on the act.

“What is the secret to longevity?” they inevitably asked.

“The secret is not widely known,” said Hilda Woolley. “You don’t want to believe what all these health fanatics say. Three eggs a day, a good bottle of wine, and lots of butter. If you like butter then spread it by the pound. The danger is to limit yourself. You have to devour these things every day so that the body learns to use the nutrients to its advantage. To have a bit here and a bit there, and not in a regular fashion, is what the health experts are on about. Three eggs, a bottle of wine, and butter, butter, butter, every day.”

“That should kill a few of them oldies off,” thought Hilda Woolley. “All these old people trying to beat my record of 106!”

Janice Hazel Rainey, the Member of Parliament for Chuffachoochoo, West Dunderland, said she was concerned about the high percentage of deaths that occurred in rest homes and retirement villages. The number of deaths per head of population was out of proportion to the deaths that occurred in other sectors of society. It was even higher than those killed in traffic accidents.

Although 98% of old people claimed that death was relatively imminent, the margin of error was 3.7%, so it was likely that an even greater percentage of elderly people were destined for death.

Janice Hazel Rainey proposed a solution; a good number of the deaths occurred while the victims were sleeping, so all beds, bedroom fixtures, and even bedrooms themselves, were removed from retirement villages and rest homes. Similarly, a number of deaths occurred in bathrooms, so lavatory bowls, basins, baths, and showers were removed.

Mrs. Vera Jolliffe, widow, aged 94, said she was delighted with the improvements and felt so much more confident in being able to reach 100.

Joyce and Neville had been married for forty-seven years. Neville had been diagnosed three years earlier with chronic heart disease. There wasn’t a great deal that could be done. He was given pills and told to eat as little salt and animal fat as possible, and to try to get some regular exercise.

If the truth be known, he was doing pretty well. They would sit at their outside table over summer, in the late afternoon, and chat away. Forty-seven years with some ups and downs! But hadn’t they done well? And there were grandkids! And they had only a few things to worry about in their retirement – apart from Neville’s chronic heart disease of course. But these things happen. It was part of the inevitability of life. And then of course, one of them could have died in a freak accident forty years ago and there would be no need to grow old and decrepit!

Joyce would frequently look at Neville, when he wasn’t watching, as they sat at the outside table over summer. Did he look pale? Was his angina playing up? Would he go suddenly? Would she come home one day from getting the groceries and find him lying dead on the porch? Would he have an attack in the middle of the night and she would have to call an ambulance? How would the inevitable happen? Joyce dreaded the day.

And then it happened. Neville passed away while watching the news one evening on television. He simply said a mild “I’m going” and died. It was very sudden and very peaceful. Just like nodding off to sleep.

Joyce busied herself with funeral preparations. She grieved. Of course she was sad! But she never realised until then how heavy had been the weight of worry.