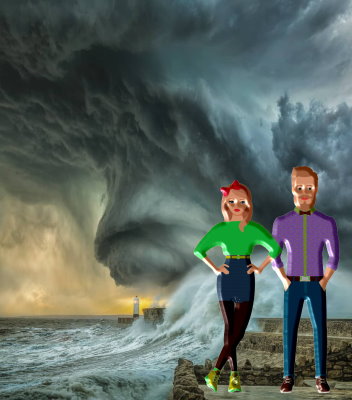 When Elaine and Charlie announced their marriage engagement everyone knew instinctively that it was a relationship concocted in heaven. They were perfect for each other. Both were mean. Both were snarky. Both could be malicious. In no time they’d knock the rough corners off one another. It wasn’t so much cruelty of action; it was cruelty of tongue. Both could make ground meat out of a tough steak simply by verbal lashing.

The engagement period seemed to go well. There were no volcanic eruptions – much to everyone’s disappointment. Then the wedding day arrived and they had chosen a simple wedding in a little country church, with just a few friends and family members. They returned from an extensive honeymoon even more convivial than when they left. The pundits’ disappointment continued.

Next came a baby, and another, and a third. This was getting ridiculous. The relationship wasn’t meant to last. Pre-nuptial common sense demanded a marriage breakdown.

And then one day Elaine lost her job as a school secretary. Apparently she had expressed an opinion that favoured the wrong political party. That was when the waspish habits of bygone years leaped back into gear. Both Charlie and Elaine stood in front of the principal’s desk.

They hadn’t lost the touch. No indeed!

That was years ago. They’re grandparents now. Many of their acquaintance’s marriages have disintegrated. One never knows.