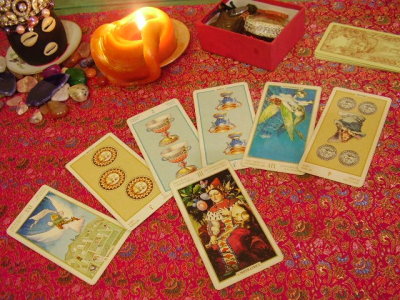 Olga stumbled across a free online webpage that would interpret the four tarot cards clicked on. The entire deck of cards was spread out, face down. Things hadn’t been going well for Olga recently and she was searching for something positive to cling to. She had been threatened by strangers several times in the past week because she had been seen going into a fast food establishment that was no longer considered woke.

Olga clicked on four cards, even though she thought that such things online were bogus hocus-pocus. The four cards when clicked on turned their faces up. An interpretation of the selected cards was proclaimed by a computerized voice.

The first card shows that you are insecure and do not know whether or not to accept a recent invitation to a birthday party. Go! Go to the party!

That’s true, thought Olga. I have been invited to Elaine’s birthday party at the solstice and I wasn’t keen to go.

The second card indicates what sort of gift you should bring to the birthday party. Nothing too expensive; nothing too ostentatious. Just a pleasant gift that the person would enjoy.

How right that is, thought Olga. I am so pleased I bought Elaine a simple peace lily in a lovely pot.

The third card indicates someone else at the party whom you meet for the first time. It could be a person of the opposite sex. The card indicates that they will become a significant person in your life.

That is so exciting, thought Olga. I’m well into the marriageable age and have yet to find Mister Right.

The fourth and final card indicates…

It was then that Olga’s phone rang. Hello. Hello, said Olga. It was Elaine. Could Olga email her the online address for party games she had told her about? Sure she could. She would do so immediately.

What a shame that Olga never heard the reading for the remaining card she had selected. Otherwise she may not have been murdered at the party by “Mister Right”.