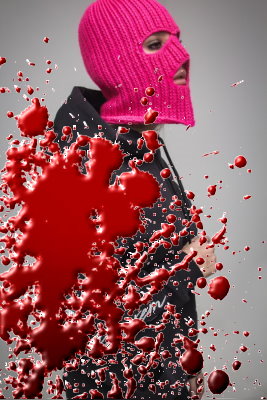 It was April Fools’ Day. Lorallie was determined to pull off what she thought would be an all-time wonderful prank.

Lorallie’s best friend Natalie, ran a business from home selling buttons. She had literally (almost) millions of buttons that she advertised online. It was hard work, and that’s because it was so heavily patronized. Natalie’s husband, Max, was involved in the business as well. In fact, Lorallie and Max were having an affair, so the April Fool’s trick was as much for the benefit of Max as for Natalie.

Although Natalie didn’t know about the affair, she herself was having an affair with Lorallie’s partner, Mervyn.

There was one problem that kept popping up. The courier would five times a week pick up the parcels of buttons from Natalie’s front door. But about once every two weeks or so the packages waiting to get picked up would get stolen. No one had seen the thief. The packages simply “disappeared”.

On the 1st of April Lorallie dressed all in black to make herself look like a stealthy thief, and she wore a shocking pink balaclava. She ostentatiously “sneaked” down to Natalie’s place to pretend to be the burglar. When caught she would cry out, “It’s me, Natalie! You big April Fool!”

But it didn’t work out that way, because Natalie, who had just heard about Lorallie’s affair with Max, could see through Lorallie’s pathetic disguise. She shot Lorallie dead with a gun.

In the long run Natalie was let off the hook by the court because she claimed she thought Lorallie was not Lorallie but the button-package thief. The button-selling business went into abeyance. Natalie and Mervyn went their separate ways, with Natalie dating Michael, and Mervyn moving in with Candy. Max now dates Cynthia. (Michael, Candy, and Cynthia are new to this story). One of Lorallie’s teenage children, Clinton, was so upset with his mother’s death that he got into bad company and drugs. (Clinton is also new to this story). The consequences of Lorallie’s ridiculous April Fools’ joke had a bagful of repercussions that went on and on, and I haven’t even begun to mention what happened to Fergus, Angela, Owen, Freddie, and Lorraine…

To make things slightly confusing, did I mention that the courier driver was Mervyn?

So think twice before you do something stupid this morning.