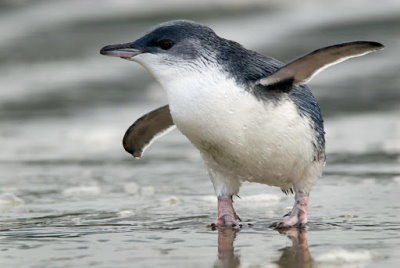 Edward had a pet penguin. It was highly illegal. This particular species of penguin was a protected species; having one as a pet was inconceivable.

But it was not as if Edward had captured the penguin and kept it in a cage. No, the penguin had chosen Edward. One day he was sitting on the pier fishing when up popped the penguin and sat next to him. At first Edward was rather taken by it all, but then the penguin followed him home and settled in. It was a Little Blue Penguin, the smallest species of all penguins. It made a lot of noise!

Each day the penguin waddled on its own down to the wharf, dived into the sea, and fossicked for its own food. It was the cheapest pet to keep that Edward ever had. Only once did it fail to return, but after a day there it was again sitting in its own special armchair on the porch as if nothing had happened.

Edward didn’t know if it was a boy or a girl but he called it Penny anyway – Penny the Penguin. And then the government’s Department of Conservation heard about it. They came and took the penguin away and it died. Edward was taken to court and fined a hefty sum for keeping a protected species. As the judge said, Let that be a lesson to us all.