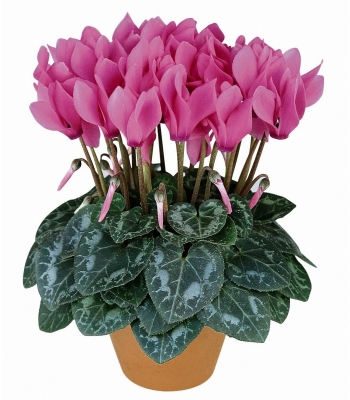 It was certainly a thrill for Hazel when she was invited to speak to the Piddlingham Village Garden Society on the propagation of cyclamen. Hazel had been growing cyclamen (in pots) for seven years; ever since her husband had given her a plant for their 18th wedding anniversary. It was a beautiful white cyclamen with a purple throat. It was called Purple Song and had been developed by Hans Styvenberg of a village not far from Piddlingham.

Hazel herself had gone on to propagate several varieties of cyclamen. One of them – a deep pink called Piddlingham Bishop – had become available at a couple of plant shops.

With the greatest of care, Hazel prepared her talk. She even took along several examples of cyclamen to illustrate the various points she was making. Quite a large group (for Piddlingham) assembled in the school hall. Hazel’s talk was well received. Some people even took notes. Would you believe! They took notes! What an added thrill!

At the end of the talk Hazel was given hearty applause. She asked if there were any questions.

Hans Styvenberg put up his hand and said that he’d been growing cyclamen for over fifty years and most of what Hazel had said was crap.

The assembled group didn’t quite know where to go from there. Hans Styvenberg was recognized as some sort of expert – as had been Hazel. People squirmed uncomfortably in their wooden chairs. In the end, Colleen Downside won they day. She suggested they all retire to the back of the hall for a cup of tea.

And a big thankyou to Helen Brunswick for providing the peanut cookies.