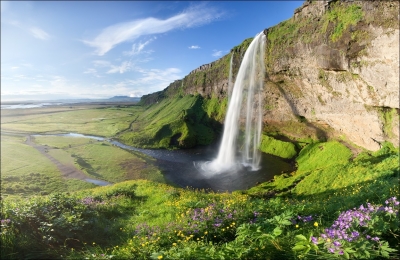 Who would ever have thought I would have survived? It was a miracle! As far as I know it has not happened before; at least that is what is being said. The waterfall is gigantically powerful, and I went over it! Apparently it’s the Seljalandsfoss in Iceland. I don’t know where I am half the time.

The whole thing was an accident. It was a mistake on my part. I was simply swimming in the river and got too close to the waterfall. Those who are nice say it’s because I was too young and inexperienced. I certainly was that! Once the power of the waterfall increased the pull of the current I was a goner. Now I know how a galaxy must feel when it gets sucked into a black hole. I was swept away!

This waterfall is high and thunderous. People from all over the world come to see it. In fact, when I went over there were quite a few taking photos of me with their cameras. I’m a star! I can tell you though, I’d never do it again. I couldn’t see myself doing it twice and surviving. In fact I haven’t really got the wherewithal or the gumption to go back up to the top of the waterfall. I suppose it could happen – going over again and being twice lucky. There are some advantages in being a fish, and a small fingerling at that. The next challenge in life is not to get hooked, cooked, and be eaten for someone’s dinner.