Recently – like a month or so ago – I got a message of congratulations from WordPress on this blog’s 6th anniversary. It’s actually been going a couple of years longer because I suffered a bout of scruples, deleted the first few years, and started again. Be all that as it may, this is Story 1600. At first I intended to write 100 stories, then 365 (one a day), then 555 stories (the number of keyboard sonatas written by Dominico Scarlatti), then 1001 (in honour of the Arabian Nights), and then 1500, and now 1600… and what the heck…

Sticking to a time-dishonoured tradition on this blog, a significant story number calls for a celebration of some sort. So this is a walk with my camera (I don’t have a mobile phone as I’m so “tomorrow”) starting from the back of the property where I live. There a spring trickles out the side of a hill. I’ll follow the trickle of water for as far as possible before hitting neighbouring property and we’ll see what happens… (Note that photos of the crayfish and the pukeko are not my own, and nor are the last three photos).

The spring seeps out the bottom of the hill and creates quite a swamp. 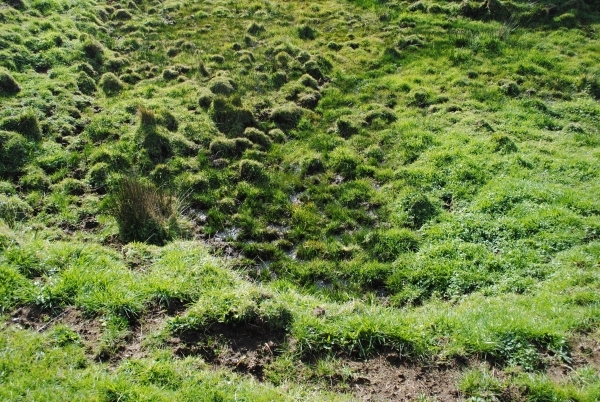 It’s a complete soggy bog, almost impossible to walk over, although the dog (who seems to have joined me uninvited) has no trouble traversing the mud.

Little rivulets quickly appear and within maybe forty yards (36 metres or so) a small stream has formed.

Soon after, a little pool is shaped, gathers strength, and would crash down in white water torrents if things were multiplied by a 100! 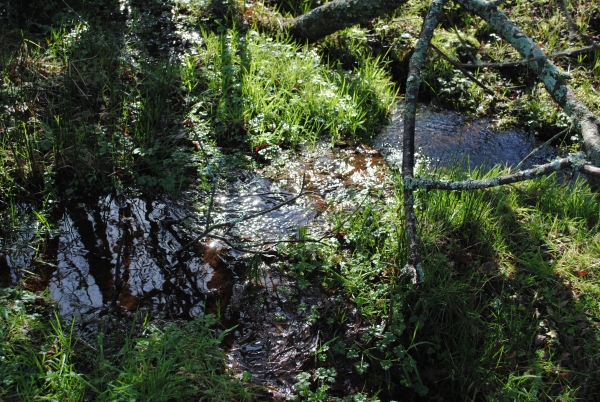 Now the cat has joined me – uninvited. Oh well – what is a celebration without friends?

Almost immediately, the newly formed stream flows through a stream-cut channel and a natural fernery.

It enters a glade of willows – mainly fallen – where the water divides into stagnant pools. The thicket and swamp make it almost impenetrable. 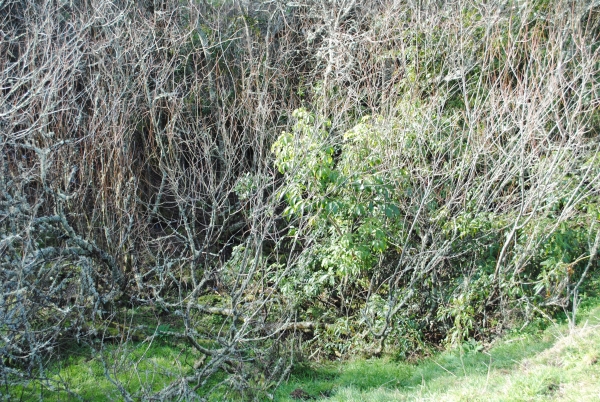 Very soon the water re-emerges and flows down a gentle valley. By now it could be called a “stream” and over time it has carved out its path, exposing rocks and boulders.

Beneath the boulders many freshwater crayfish hide. They are a protected species – so no hors d’oeuvres tonight!

A skylark sings high in the sky. I can’t see it for the glare, but I’m joined by six fantails. These tiny birds dart and flutter around my head, twittering madly. They drive the dog crazy, but the cat remains nonchalant – knowing from experience that such zig-zagging creatures are uncatchable. Of course, it could be claimed that I’m a fantail whisperer and they twitter around my head because they love me. But my walk disturbs gnats in the grass, and this presents a feast for the fantails. Their fluttery flight is impossible to capture with my camera, but one bird sat long enough on a fence wire to allow a photograph! 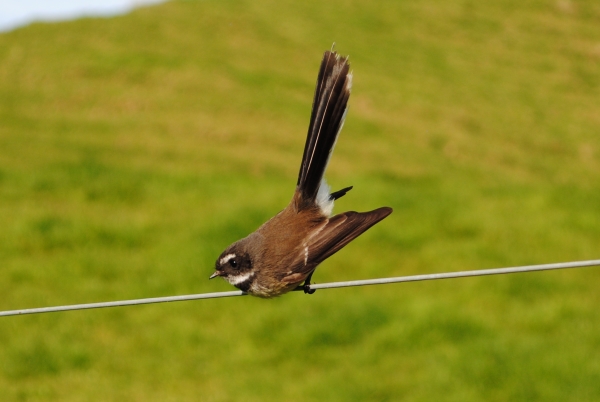 There are literally thousands – if not millions – of Little Blue Butterflies and Common Copper Butterflies feeding on the winter-flowering daisies and dandelions. My steps create clouds of tiny butterfly wings!

Soon the stream becomes wider and still. It’s as if it’s collecting itself, waiting to tumble to the next stage. 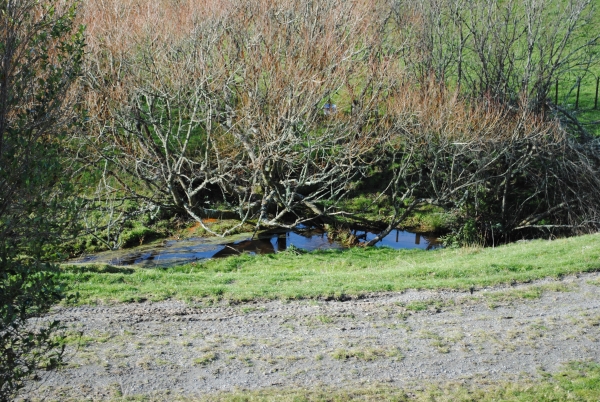 And here it’s on its way!

Immediately it forms a deep pool that has an eel lurking in it. 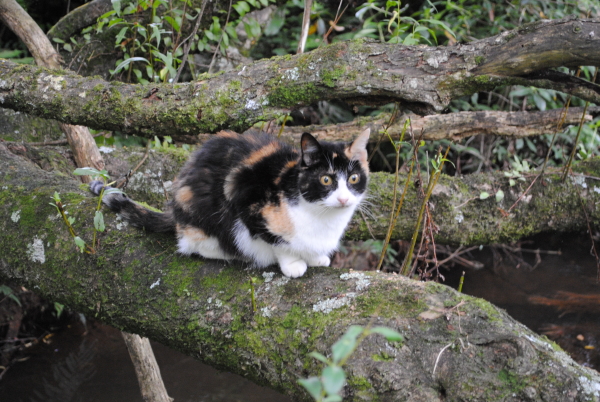 From here, the stream goes into shady undergrowth. It passes into a culvert, under a road, and out onto a neighbouring farmer’s farm. 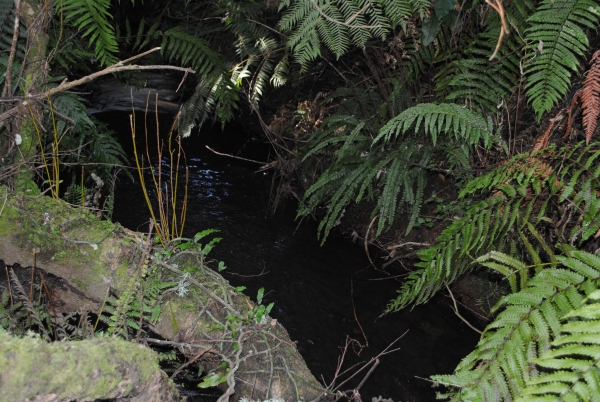 I guess the walk has taken about 25 minutes. The stream cannot be followed anymore. But I know it later joins the Patea River. 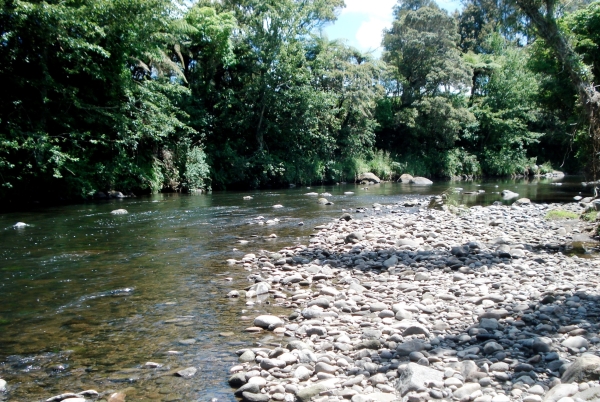 It passes through Stratford, my local town. The volcano behind is Mt Taranaki.

From there, at a town called Patea, it flows out to sea! 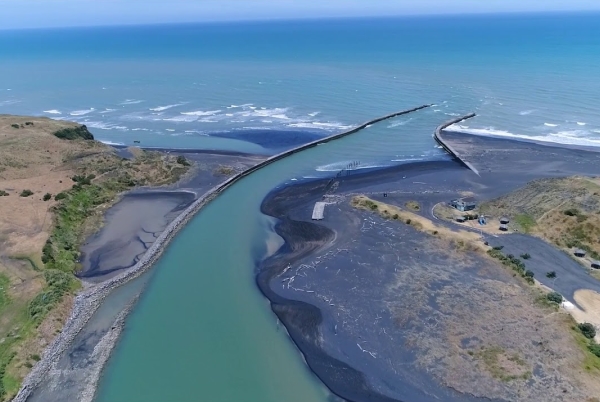 Phew! What an exhausting walk! 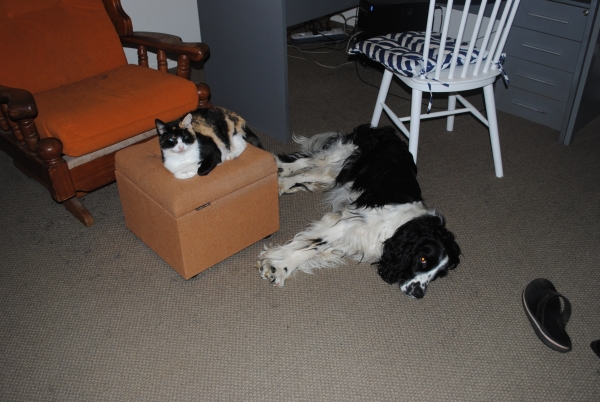