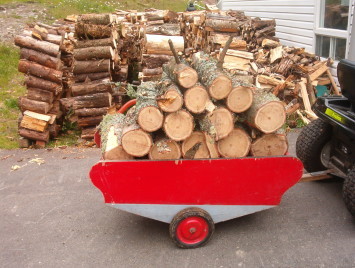 Curtis and Miriam hadn’t actually frozen to death throughout the winter, but they were never warm, never cosy. The wood burner in the house worked well enough, but they had to ration the firewood to make it last throughout the winter. The next winter they wouldn’t be caught out. They lived on the edge of a pine forest, so the coming summer would be a time to collect, chop and stack firewood.

Come summer, and Curtis and Miriam put several hours a day into the firewood. By autumn, they had enough firewood to keep the fire going all day every day throughout the winter.

That was when they received a notice from their landlord to vacate the house in several weeks. It was needed. It would no longer be rented.

Curtis and Miriam looked everywhere for another house to rent. The only suitable one didn’t have a wood burner. It had a heat pump. They moved in. They sold their firewood.

Come winter, on the proceeds from the firewood, they had a wonderful two weeks basking in the sun on a tropical island.