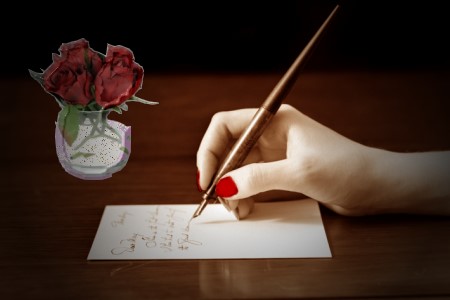 If there was one thing that Jacqueline disliked doing, it was writing a letter of condolence. What does one say? But something had to be said, especially since Will Jones, the husband of one of her closest friends from school days, had passed away. What a shock his death had been. Jacqueline hadn’t seen Sheila for years, but she read the death in the paper; Will Jones, loved husband of Sheila.

Dear Sheila,
I was shocked to read in the paper of Will’s passing. When young, the three of us had spent many happy hours… etc.

Jacqueline laboured almost two hours getting it right. In the end, she was rather pleased with her two page note. She posted it.

Dear Jacqueline, (wrote Sheila)
Will and I split up about fourteen years ago. He lived in Colorado with his money-grabbing lover. As far as I know, he died when I hit him with the hammer. I didn’t hang round to find out. I’m expecting the police to call any day. In the meantime, can we meet for coffee?
Sheila