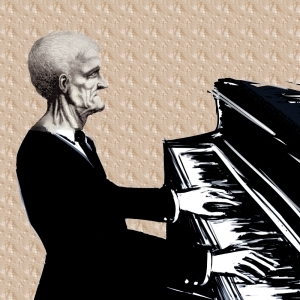 Desmond had recently had all his teeth pulled out. He awaited the arrival of brand new dentures after the customary settling of gums. He wasn’t one to hide his tarnishings under the carpet. If Desmond had a scar on his arm he would wear it uncovered and with pride. And so too his toothless gums. Why hide? If people didn’t like it, they could look elsewhere.

To show the world his daring abandonment to gumlessness, he decided to play the piano in the local mall at lunchtime. He played for an hour; Mozart, Haydn, Beethoven, Schubert. People gathered. Quite a crowd in fact. Young people too. Who said classical music wasn’t appreciated? See! He was popular himself – toothless and all! He was liked! What a success! Who cares about looking awful with a mouthful of nothing?

“What composer wrote that last piece?” asked a young person.

Desmond puffed out his chest.

“Well,” he said. And then he dribbled. It was the biggest slushiest dribble he’d ever done in his life. It was disgusting. The crowd drifted off.