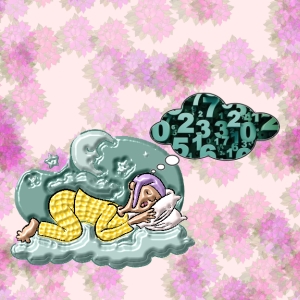 Mrs Myrtle Capstick, a widow, has struck it lucky. She had a dream with the lottery’s winning numbers. She used those numbers and is now $1,000,000 richer.

“I knew the minute I woke up that these were my lucky numbers, so I wrote them down,” said an overwhelmed Mrs Capstick.

Dr Harry Shinburg, Professor of Mathematics at the University of Myrtlebridge, said the chances of that happening were astronomical. “It’s astronomical enough getting all six numbers in a row, but to get them in a dream is astronomically astronomical”.

Vladimir Staffordshire, secretary of the Sceptics’ Society, said that sadly there was no creature in a parallel universe waving the numbers at Mrs Capstick in a dream. “It’s a fluke,” he said. “That’s all it is. There’s nothing preternatural about it.”

Over three hundred comments have been made on the social media. Many say they’ve had a similar experience, although the prize money has been considerably smaller. Norma Booner said, “Wow! Wow! One million! In a dream! Wow!”

“I’m just over the moon,” said Mrs Capstick. “Just over the moon. I received these numbers in a dream. Call it what you will, it happened. Ironically, the first thing I want to buy with my money is a new bed and mattress. If only my husband was still alive to share the excitement! Who said dreams don’t come true? I’ve never won a penny before. To think, after forty-seven years of taking these same dreamed numbers and it’s at last paid off!”