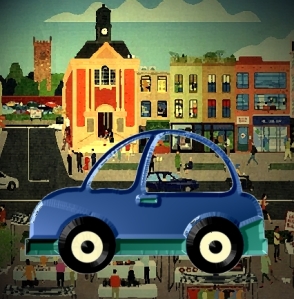 Apart from getting some groceries, Enid had two things to do in town that day: she had to return a book to the library, and she had to pick up a medical prescription at the pharmacy. Probably the best thing was to do these two errands first, before getting the groceries, and then she could whip off straight back home in her little blue car and not let the frozen ice cream melt.

And then there were the groceries. She had the list somewhere in her purse. At least she hope she’d put the grocery list in her purse. Once or twice over the years she’d left it at home!

“Oh! Blow!” thought Enid. With her musings she’d inadvertently passed the turn off to Hector Avenue, and now she had to rearrange the order of getting things. She would turn down Styx Street.

She turned down Styx Street. That was a pity, because she was hit by a truck and spent the rest of her days in a wheelchair.