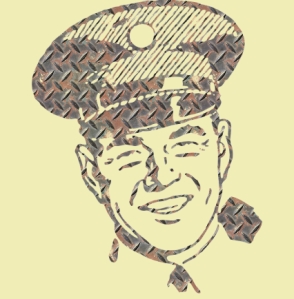 Constable Alexander Mistletoe has had a busy day.

First of all, the fire brigade had been called out to a blaze starting in the backroom of a church hall. He had to be there to keep the crowd back. And he acted as spokesperson:

“Fortunately,” he said, “the church hall had sprinklers and an alarm system installed. It shows the value of having a sprinkler system, and completely warrants the cost of a fire alarm installation. Because of this, we were able to save the building. Everyone should check the batteries in their smoke alarms throughout the house. It is quite irresponsible not to do so.”

Next, Constable Alexander Mistletoe had to attend an accident. A pedestrian had been knocked down by a car:

“Unfortunately,” he said, “the pedestrian was deceased at the scene. It highlights the importance of wearing bright clothing with reflectors when walking along the side of the road. It is quite irresponsible not to wear bright clothing.”

Next, Constable Alexander Mistletoe went in search of a missing teenage boy. His parents were in a panic. He was eventually found at a friend’s house.

Next, Constable Alexander Mistletoe arrested a drunk man for loud and bawdy behaviour.

“This goes to show the importance of drinking responsibly,” he said. “Far too many people have not learnt to know the limits of what they can and cannot drink. And how much they can drink.”

“And, Constable Mistletoe,” asked a reporter, “do you think people are learning from their mistakes?”

“How would I know? I’m not here to moralize.”